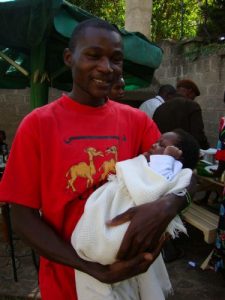 Xcel project has been our biggest challenge and greatest learning curve to date, from ensuring quality and safety within the workshop to working in one of Africa’s poorest places. Getting to know the community and individuals has been rewarding and at times heart breaking. From where we started this workshop has been a great success now exporting to customers in Canada, America and Australia. Vincent and Ishmael now own and run the project.

In 2004 Zuri Design started buying bracelets hand made from cow bone from Luckysama women’s group in Kenya. The women were buying the beads from various workshops in the slums of Nairobi. After seeing the potential for this type of jewellery in the UK and with a commitment to fair trade principles Zuri Design were keen to establish who was making the beads and ensure that the prices paid for them was fair. After further research into the process of making beads from cow bone, Zuri Design seen the potential for starting a workshop providing employment and training for the unemployed youth in the slum area

After discussing this with Vincent Odour, project manager of Xcel Project, a project which has years of experience working with the youth in the slums, it was discovered that Vincent too had been thinking of the same idea. Together Xcel and Zuri decided that the project would be used to provide training and subsequent employment for former street boys from Kibera slum, one of Africa’s largest slums.

In October 2004 Zuri Design used its 15% fund to finance the start-up of the bead making project based at the Xcel project in Kibera slum, Nairobi. This involved providing the finance to purchase the machinery and tools. Xcel project provided the training facility, identification and subsequent enrolment of the boys into the project and was also responsible for the contracting of a designer/manager to train the boys in the skills of bead making from cow bone.

All the boys came from a background of living on the streets of Nairobi. In all cases they ended up on the streets due to poverty, some were orphans or from single parent families and left home to search for food to feed their brothers and sisters. Vincent first came to know the boys when they came to the feeding centre he worked at in Kibera. At first they came once or twice a week, but gradually they came more often. The centre offered counselling and help with drug addiction. Most boys living on the streets sniffed glue. With the bone project in mind Vincent and the counsellors identified the boys who seemed ready to change their lives and leave the streets for good. Six boys were enrolled in the project.

For the first three months the project manager Benmos trained the boys intensively, financed by Zuri Design. After this training period Vincent managed the project. However it quickly became apparent that it was too soon for the boys to be without their training manager. Competition is fierce in the craft industry in Kenya and as a result the project needed to ensure its quality and designs matched those offered elsewhere. Zuri Design financed the return of Benmos to the project for another four months to support and develop the boy’s skills not only in bead making but in all other aspects of running the workshop including managing workloads and completing orders on time.

2006 One and a half years on the project is was self sustainable and ran entirely by four of the originally enrolled boys and Ismael as their appointed manager.

For the boys the transition from life on the streets to holding down a job and re-integrating into society has been far from easy. It has been a long process, which for most of them started long before the workshop did. Some of the boys drifted in and out of the bone project, especially at times when demand for the beads was low and therefore work was not continuous. A couple went back to sniffing drugs, with one even sniffing the glue in the workshop.
Some of the boys were brought up in the streets and it was the only life they had ever known like James Likhavo who was brought up in the streets by his mother and therefore belongs to a street family. Joining the project he enrolled in literacy and reading classes.

Kennedy Ochieng known as Abuya to his friends, age 22, has been with the project since the start. Here are his words on his life on the streets and his life today since  working on the project.
“I used to live with my parents and go to school in Langata. While I was at school I got some bad friends who showed me the bad way and I dropped out of school when I was 12 years old. I left school and ran away from my parents and started living on the streets. I collected plastic and brown paper for money. With the money from collecting I bought glue and started sniffing. My mind was exaggerated. I did not know myself and started fighting and could not go back to my family. We slept in dustbins. For three years I drifted between home and the streets. When I was 16 I started coming to Vincent’s centre to eat on a Monday, Wednesday and Friday. The other days I was back on the street. Vincent and Dickson started encouraging me to leave the street. I went to Vincent and asked him if he had anything at the centre I could do. I was enrolled in the art and craft centre and started making wooden frames. But I was not committed to this work and I would only work now and then. In between I was on the streets still sniffing glue. Then Vincent proposed I start training on the bone project.” When asked how the work is on the project, Kennedy said, “I am happy, I am earning money, I have my own house and buy my own clothing. I am back in touch with my parents and go and see them sometimes.” Asked what his goals are he answered, “To become rich, to help people who go without – orphans, street boys – where I come from. I would like to save and buy 3-4 machines and open a big bead workshop where I can train others. I would also like to do go out of the workshop and make sales.” Vincent asked Kennedy what his motivation is to work so hard, often working the night shift, he tells Vincent, “At home I am lonely, I like to be here (the workshop) with my friends, making beads and knowing I will get a weekly wage. When I am idle I think back but when I work I face forward.” Kennedy currently lives in Kibera slum we asked him if he sees himself living there indefinitely he tells us he wishes to ‘migrate’ and that God did not make him to live in a slum.

Vincent had known Kennedy for 4 years when we started the project. In September 2005 this is what Vincent said on his progress, ” Kennedy is the surprise among the rest, he has been on drugs until September last year and we could not believe how he has transformed and worked wonders, presently he leads the rest because he is very fine with both machines and his hands. He’s been in the streets since he was 12. We’ve rented him a house in the slums and he’s staying alone. Kennedy has no immediate relative in the city and entirely depends on himself.” In March 2006 Vincent told us that Kennedy is now 100% committed to the project and works full time and overtime to complete orders. He also pays his own rent for his home in the slums.

“A Word From Helen!

I think one of the greatest challenges with fair trade is ensuring long term business for the workshop you are trading with. We have worked with this group since 2006. We have worked hard with the help of some of our customers, for example Shared Earth, to develop new products and designs with Xcel. Vincent, a designer, is constantly trying to change the products made at the workshop. Ishmael is also very creative and makes beautiful recycled pieces. The work ethic of the young people who work in this industry in Kibera is second to none and with more support for this range of products the workshop can help many more people change their lives. Its potential is unlimited! When I visit Kibera I am made so welcome. Visiting the homes of those who work on this project

I have got to know their families and culture. The challenges I have seen them face over the years and overcome is my inspiration! I can’t wait to visit Xcel again soon.